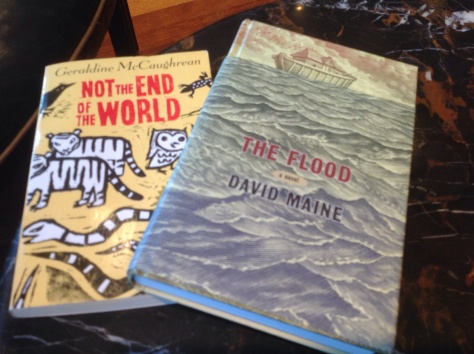 There has been MASSIVE interest in the new Noah film – and rightly so, what a stonking story! I hope to see the film at some point . . . but, I ALSO have a couple of great books on my shelf which use the biblical story of Noah as a backdrop for some great fiction. So, in the next couple of days – 3 brief reviews – first up:

1. ‘The Flood’ by David Maine
This is a staggering book – drawing you right in to the time, the place, the whole feel of . . . Well, humanity on the edge of a precipice! Earthy, honest language from a whole host of characters (we get Noe’s perspective – Noah; and a bunch of his family comment – from totally devoted ‘my father can do no wrong’ to, ‘dads a crackpot’. All this commentary on the crazy notion of an ark in the middle of nowhere and beautiful writing,

The pages where Noe speaks himself are wondrous in their simplicity – this simple, straightforward man thrust into a bizarre and epic struggle to save his family and a bunch of animals . . . but, the voice I enjoyed the most was when his wife narrates, she refers to Noah as, ‘Himself’,

Himself thrives on sacrifice. It’s bread and meat to him, it’s air, it’s the blood in his marrow. If God ever stops asking for sacrifice, Himself won’t know what to do with himself.

We come through the maelstrom and out the other side, Noe hears God speak and be holds the sign of God’s promise,

Across the sky streaks a rainbow of such intensity it leaves Noe gasping. Spanning from horizon to horizon, it sprays down colour like an enormous prism, painting green fields with red, riverbanks with yellow, fruit trees with dazzling indigo. Even Noe’s own shadow glows with a crisp blue sheen. He tries to speak but the words cower in his larynx. Then The Lord is gone out of his head anyway, and Noe is alone again.

It is not the Bible. It is a work of fiction, but a fabulous rendering of the story. It is not a child’s book. This is a grown up rebelling, nature red in tooth and claw – as is humanity, which is why God cleansed the world. It is powerful, sobering stuff – and will leave you wondering at what took place and what it meant for Noah and his family to get ready for it (for years) then live through hell on earth and come out the other side . . . It will also have you scurrying back to the scriptures to read the original.

Tomorrow, ‘Not The End of the World’ by Geraldine McCaughrean . . . 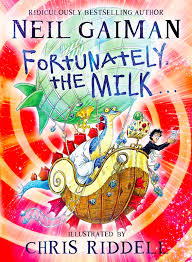 Neil Gaiman writes odd stuff.  Dark odd stuff for adults, weird and crazy laugh-out-loud-funny odd stuff for kids.  “Fortunately, The Milk” is due for release in mid September 2013 . . . get it pre-ordered now!

A (apparently) hapless dad is left alone with the kids while his other half heads off for a conference . . . what could go wrong?  I have had many conversations with my wife where I have realised I am nodding, but not paying attention (doom), at the start of this story the Dad is buried in a newspaper (with Gaiman, that could be literally, but I just mean he is reading it), but we then discover he is an astonishing Dad as he recites back to his other half everything she has just reminded him he needs to do for the kids (clearly, she is taken a back . . . I can only imagine the dad grinning to himself behind the newsprint).

There is something though – in the midst of the genius of apparent total recall something gets dropped off the list  – er, “dad, there is no milk”. . . . Dad leaps into action – and disappears out the door, it is unclear for quite how long, but crazy, down right odd, bizarre and loony adventures ensue (or at least, upon his return this is the tall story the Dad tell the kids . . . )  I love the classic comments from the kids, “I thought this story would have ponies.”, and Dad, deftly weaves in some ponies . . . other interruptions are dealt with in a “I was just coming to that” brilliance.  By the end of the story I wanted to BE this Dad (not of fictional children, I have some great ones of my own), but, be that spontaneously creative – have some hilarious adventurous fun with something as ordinary as fetching the milk.

A tall tale, with a shed load of improbable characters and scenarios thrown in, if only every mundane act took us on a magical journey – life would be exhausting, we would never finish conversations (“you think YOU had a day of it when you tried to cross the road during the earthquake which hit at exactly the same time as the total eclipse of the sun, well, that’s nothing . . . “) . . . but think of the fun, and death defying, lives we would lead!

Get this book, maybe even let your kids read it when you’re done.